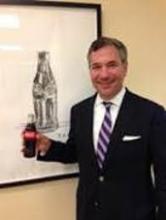 Eugene “Gene” M. Rackley, IV is Director, Government Relations for Coca-Cola North America headquartered in Atlanta, Georgia. He is responsible for federal and state legislative and regulatory issues that impact the beverage industry.

Gene has more than 25 years of in-depth public affairs and government relations experience. He has worked for Coca-Cola for 18 years. In 1997, Gene joined Coca-Cola Enterprises Inc. (CCE), formerly the largest Coca-Cola bottler in the World, as Regional Director, Public Affairs in Denver, Colorado. He was responsible for all public affairs issues impacting CCE in Colorado, New Mexico, Arizona, Wyoming, and Montana. In 2000, Gene was named Corporate Director, Public Affairs for CCE in Atlanta, Georgia. In 2005 he was promoted to Corporate Vice President of Public Affairs and Government Relations responsible for all Federal and regulatory public policy issues facing the beverage industry.

Gene serves on the Georgia Chamber of Commerce. He formerly served on the boards of the Georgia Conservancy, the Georgia Beverage Association, the Keep Georgia Beautiful Foundation, Georgians for Comprehensive Recycling, and the Carl E. Sanders YMCA. Gene was also former President of the Georgia Council of Coca-Cola Bottlers. Gene received his undergraduate degree from the University of Georgia in 1990.

Established in 2010, the Georgia Natural Resources Foundation is a 501(c)(3) charitable organization that supports the preservation of Georgia’s natural and cultural resources through projects, activities and programs of the Georgia DNR. We rely on donations and partnerships with individuals, corporations and other similarly aligned foundations to support our initiatives.